What College Recruiters Really Look For In A Player

You are here: Home / Players / What College Recruiters Really Look For In A Player

Here is the number one question that I was asked as an Assistant Coach at Cornell:

What are college coaches looking for when they are recruiting players?

Most people give the simple, easy answer –

Although true, these components of your talent only tell half the story of the process that coaches go through in their decision to recruit a player.  What I’d like to do is take you inside that process through the lens of a college hockey coach.  Through this lens you will get a better understanding of what many coaches are looking for, and how to go about putting yourself in the best position to succeed and be recruited.

1. Play for a Good Coach

One of the best assets of a good recruiter is the ability to build relationships with people who will give them an honest opinion about the players they coach.  Yes, we need to have an “eye for talent”, but those relationships give us a base on where to start looking for players.  For us, being on the phone discussing potential recruits is just as important as being in a rink.  And we are on the phone with your coaches A LOT.

As Assistant Coaches, we are responsible for recruiting all over the continent.  Over my five years at Cornell I watched the USHL, NAHL, BCHL, AJHL, SJHL, MJHL, OJHL, CCHL, GOJHL, USPHL, Prep School, High School, HPHL, AYHL, Tier1HL…and many more.

Do you think that we get to see all of these players, in all of these leagues, all the time?  Not a chance.  So we rely on youth and junior coaches we trust to give us constant updates on their players and others in their area.  And I can tell you that there are coaches that we trust, and others that we know will sell us anything-under-the-sun for their own self interests.

“So, where should my son play next year?”

Let me take you into a late-night conversation between college coaches after a long day of scouting at a tournament.  It usually involves some wings, a few drinks, and a lot of talk about hockey.  The number one issue griped about?

Sit at a table with some coaches that have been around for years…it’s all they will talk about.  All they want are players that are ultra-competitive and hate to lose, yet they feel like the competitive kid today is a dying breed.

If you want to get recruited: COMPETE.  It is becoming harder and harder to find, but significantly more valuable to coaches on the recruiting trail.

3. Be a Leading Scorer or a Captain

You have to score goals to win hockey games.  That is a fact of life.  So if you are one of the points leaders on your team, we will probably take notice. 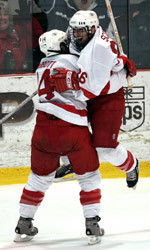 But that doesn’t mean you can’t play college hockey.  Not one bit.

So if you are not someone that ends up on the scoresheet every night – STAND OUT for your work ethic, character, and leadership abilities.  There is room on any roster for players that can grind it out and may end up being a captain one day.

College coaches talk about needing player leadership like scientists talk about humans needing oxygen to breathe.  They all recognize their program HAS TO HAVE leadership from within the locker room to have success as a team.  Here is a great example:

After they won their first ECAC Championship, I asked (Head Coach of Union) Rick Bennett why he thought they won.  His answer: Nolan Julseth-White.

Now, this was a team that had Shayne Gostisbehere, Danny Carr, and a roster of talented players that eventually went on to win a National Championship.  But Nolan Julseth-White, a senior defenseman that hadn’t scored a goal in his college career, was Coach Bennett’s answer to why their team was successful.

Because he was one of the best leaders Coach Bennett had ever seen.  He kept the locker room together and held his teammates accountable for buying in to what the team wanted to do.  As a young coach, this was an eye-opening conversation for me.

To college coaches, player leadership is GOLD.  So if you can’t be Shayne Gostisbehere, and there are very few that can…Be Nolan Julseth-White.

One of the best compliments I ever heard from a coach that I trusted was:

“Toph, I would let this kid date my daughter.”

Now, I don’t have a daughter.  But I know many coaches that have daughters.  And to hear a hockey guy say that…all I can say is, WOW.  Now I highly doubt that would actually ever happen, but the comment was his way of telling me how much he believed in the kid’s character.

CHARACTER COUNTS.  It doesn’t only take great players to win, it takes great people.  Great people allows for a great culture, and a great culture is the most important characteristic of a winning program.

Kids: Be a good teammate.  Stay out of trouble.  Have positive energy.  Pick up pucks.  Load the bus.  Block shots.  Play hard every day.

These things don’t take talent.  They take a commitment to being a good person, which is every bit as important as being a good player.  Your coach’s word about your character is something colleges hold in very high regard.

But here’s a hint:  If you are ever in that situation with your coach’s daughter, DON’T DATE HER.

If your dream is to play college hockey, you are going to be a STUDENT-ATHLETE, not just an athlete.  Put in the effort with your studies, and not only will there be more opportunity for you to play college hockey…You will be more ready for the rigors of being a student-athlete when you get to school.

6. Be Resilient and Be Better…Your Dream is in YOUR Control

While writing this entry, I felt it necessary to add one more extremely important item due to the landscape of college recruiting today.  With how young the process has gotten, I have been told that many kids consider their opportunity to play college hockey over at 17 if they don’t have a commitment.  Which really, really sucks.

Kids: If you aren’t receiving the attention your peers are getting at a younger age, be resilient and know that you have time to get better.  Teams have won national championships by recruiting players who are late-bloomers and just took some time to mature.

Here’s a story from personal experience:

When I was a senior in high school without a college commitment, I led the USHL preseason tournament in scoring.  After my last game of the tournament, schools were lined up to talk to me.  It was an awesome feeling speaking with some of the top programs in the country.

My next game, I tore my ACL.  Only one of those schools that I spoke to decided to keep in touch with me.  Only one.

It shook me, but I used it as motivation to show all the schools that gave up on me that they were making a big mistake.  I would come back better than ever, and I don’t think there was a time in my life where I was as committed to the game of hockey than in those grueling months of rehab.

I had to fight through adversity.  I had to up my commitment level.  I had to keep a positive attitude while having faith that if I worked harder than everybody else, things would end up working out.

They ended up working out.

And I am convinced that it did because I learned how to be resilient and how hard I needed to work to improve my game through that agonizing time.  I believe that tearing my ACL was one of the best things that ever happened to me.

College coaches love seeing kids that have vastly improved their abilities.  It shows that they work hard and are committed to the development of their game.  This is a skill that is NECESSARY to succeed at the college level.  The most successful players that I have played with or coached are plain and simple the ones that work the hardest at their game.

So if you are wondering why colleges haven’t yet called, instead of wondering why…Work.  And then work harder than that.  Use your adversity as motivation to work harder than you ever have done before.  Realize that your destiny is in YOUR control.  And if you work hard enough, that phone call from a coach could be coming soon.

I hope this information helps to shed some light on the ever-talked-about recruiting process.  If you have any questions, please submit them below.

Question for Topher? Submit below

Wanna Succeed? Learn How To Fail
Go to mobile version
Scroll to top