Home
You are here: Home / Coaches Corner / Knowledge Of The Game Vs. Knowledge In The Game,  What Should You Be C...

First off what are the differences…

Knowledge of the game —> Explicit memory, you consciously think of a play and or you can explain an

outcome you desire. Basically any consciously thought of idea about the game.  Ex. Studying game film, writing down specific areas that need improvement for your player. Thinking through this information and storing it in the long term memory to be grabbed later on to show the player.

Knowledge in the game —> Implicit memory, you build your implicit memory by doing, feeling through situations. These memories are not easily accessed consciously, which holds up better under pressurized situations.  Ex. walking…do you think consciously about walking, or driving a car? You’ve built up implicit knowledge, that allows you to focus consciously on other things while executing the motor task.

These ideas were first introduced to me by Mark O’Sullivan on his blog https://footblogball.wordpress.com and more recently re-introduced in Nick Winkelman’s Language Of Coaching book. And before I go any further both of these types of knowledge are very important. And I believe a combination of both can yield great results but one can certainly interfere with your performance if it isn’t harnessed correctly, more on that shortly. The way Nick describes these two memory systems in his book is outstanding. Paraphrasing, explicit memory is good to set the goals, or establish an outcome. Implicit memory is very good at deploying and adapting the motor actions required to achieve the goal. So Knowledge of the game or explicit memory is good for goal setting and describing the desired outcomes. Knowledge in the game is the implicit memory activation… doing, deploying the action, adapting in the moment.

Ok, so why is this important for coaching or playing? Coaching someone with only knowledge of the game may have limitations. For example, how many times have you told Johnny to check his shoulder when going to get a loose puck? Johnny understands the knowledge of the game, he could probably verbalize it back to you but when in the game moments he isn’t tapping into or building implicit knowledge (Knowledge in the game). This is usually due to having not been given a chance to feel through these moments, fail and try again. 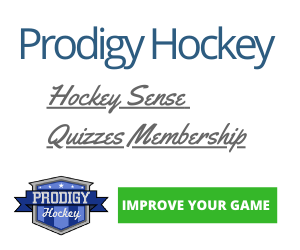 Instead we go back to the dry erase board to explain using explicit knowledge of the game. Here is a simple example, If I’m working on defensive zone retrievals, I’ll set up a coach to dump the puck in, a defenseman  ready to get the puck and to start one fore-checker ready to apply pressure. The retrievers goal is to skate the puck out of the zone or pass back to the coach. Passing to the coach is worth 1 point, skating out of the zone is 2 points. I’m explicitly giving the rules of the game, and goals. How the player solves the problem of pressure is up to them, if it’s too easy and they’re succeeding too often (executing the goals) I’ll add more pressure in the form of more forecheckers or by constraining the space. All of the reads, feel of what a player may encounter in a game are intact with their focus on solving the problems, during this immersive experience they’re learning implicitly how to move, and solve problems with their actions. Instead of explicitly focusing on the techniques, skills to execute they’re focused on their task goal. They’re still in most cases executing many different techniques, or learning what works implicitly. This is a hard concept to understand but think about the example above regarding walking, or driving for a different reference.  Between reps I can ask the player questions, and if they would like explicit instructions I can provide some that are intrinsic. Meaning that the instruction focuses on the physical feel of the movement as it is being performed. It is what is felt by the player as they execute a skill or performance. For ex. add deception, change speeds. Or if I need to get the player to have more experience with having to use the net or change speeds for example, I can design those moments to be shaped by the fore checker. This is one example but hopefully gives you some insight into feel, learning within the game vs. learning only through explicit verbal instructions. The deep implicit learning comes from the doing, with a task goal to achieve. Like I mentioned earlier both are important, but we need the doing knowledge as well as the explicit instructions. And in most cases, we need more doing.

So when you’re planning your practices, we need to give time for feel, making mistakes in realistic game scenarios with decisions to be made, catered to the skill level of the player or players in front of you.

Lastly, how does this affect performance on Friday night? If you’re giving your players a laundry list of Explicit information (knowledge of the game) to remember before going on the ice, should you expect great results?? Probably not… in another great section in Nick Winkelman’s book “Pay Attention”,  it talks about our “working memory attentional bandwidth”. Try remembering a phone number just given to you and then execute a slap shot. After executing the shot can you still remember the phone number correctly? See what I mean?

Once it’s game day we need to keep our players “working memory” open ready to solve game problems as you’ve prepared in practice, not introducing new ideas that could fill up the working memory bank. Well designed weeks of practice hopefully build up the implicit knowledge base we need to tap into that and trust our athletes to execute.

Good luck, and feel free to submit questions below.