Home
You are here: Home / Coaches Corner / How Elite Players Are Scoring in the NHL: Phil Kessel

Do you ever wonder how the top players in the Show are scoring their goals on a regular basis? What high end skills these players are perfecting to allow them to scoring 20, 30, 40 goals a season? Are there a lot of common traits between these high end scorers? And what skills sets are paramount to executing these plays? Below I have gone through a collection of goals scored this season by Toronto Maple Leaf’s star Phil Kessel. I have written short breakdowns of 20 of Phil’s goal’s this season. At the bottom of the article you will find the total analysis and skill set breakdown 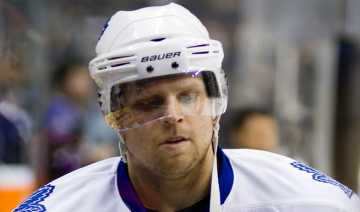 How is Phil Kessel Scoring Goals This Season?

2.1.14 – Catch and Release, has great timing and patience, wins body position in front of the net to give himself the ability to get pass and release quick shot.

2.1.14 – (Power Play Goal) Catch and Release off of the half wall. Releases puck inside the dots at the top of the circles.

2.1.14 – Phil uses his skating ability to win body position going to the net and gets a great pass back door for a the tap in

1.21.14 – Reads play, uses speed to get on the fore check to track down the puck, moves puck goes to the front of the net/slot area, quick catch and release for the goal.

1.20.14 – (Power Play Goal) Makes move off of the half wall to get to the top of the circles and releases quick shot.

1.15.14 – Reads play as F2, puck deflects to him off of a bad pass, takes three strides into middle of the ice at the top of dots releases snapshot low blocker.

1.10.14 – Starts breakout, goes to weak side through neutral zone and gets pass in stride, shoots in stride insides the dots top right

12.29.13 – (Power Play Goal) Break puck out of own end and Kessel sets up in zone. Puck gets moved to the middle of the ice, Kessel reads play goes to the slot, receives pass for the one timer, short backswing

12.14.13 – Reads play, goes hard through the middle of the ice into the offensive zone, receives pass for a quick catch and release shot low glove

12.3.13 – (Power Play Goal) Puck is controlled on the right half wall, Phil lingers patiently in the circle dot on the weak side of the ice and then goes back door for pass across for a quick shot for the goal.

11.27.13 – Phil reads play, Bozek wins battle behind net, Kessel sneakily finds ice in the slot, receives pass for the one timer which he shots low blocker.

11.19.13 – 2 versus 1 rush,Phil takes puck to the right side, with feet moving releases shot high glove for the goal. Released shot inside the dots, parallel to the dot

11.19.13 – (Power Play Goal) Brings puck into offensive zone on the right side, feels pressure executes Gretzky turn at the top of the circles, creates space for himself takes ice inside the dots and releases a quick shot with feet moving at top of the circle low blocker.

11.8.13 – HIGHLIGHT REEL – Winds up in zone uses great speed and momentum through neutral zone, identifies d is outside the dots on the left side, makes move to the middle of the ice and shots 5 hole with feet moving 5 feet out.

What we can deduce from this set of examples are that Phil’s ability to read plays, skate, collect and shoot quickly, shoot in stride, find soft areas in the slot (positioning) and take one timers all are high end skills that allow him to be a dangerous scoring threat. Only one of the goals would I personally consider a highlight reel goal 11.18.13. The rest of his goals are from his ability to find ice, collect passes and releases accurate shots very quickly. Another thing I noticed was that Phil generally shots low. Only on a few of his goals did he shoot high!

Scoring Skills You Should Be Teaching and Working On that Translate to Higher Levels!

Now its Your Turn Let Us Know What You Think! Next player we will Highlight is Patrick Kane 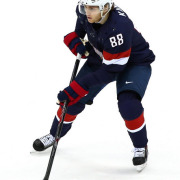