It Ain’t the Kids – 5 Keys to Coaching “Kids Today”

Over the past couple years, I have sat through a countless number of seminars while getting certified to coach youth hockey. 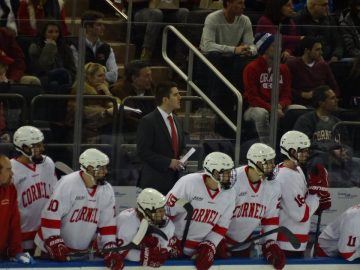 Being a former college coach, I can’t say I was totally thrilled about the process.

The seminars were long.  They were repetitive.  And they were taught by people who were less enthused to be there than those of us getting certified.

But as in anything, I tried to take a positive out of the experience.  I met some good people and learned a little bit along the way.

But for whatever reason, every single discussion at some point turned to a certain hot-button topic:

“THE KIDS OF TODAY”

I’m not exaggerating.  EVERY. SINGLE. DISCUSSION.

Save it.  I’m tired of hearing about how hard it is to coach nowadays and how you miss the good ole’ days.

COACHING IS HARD.  It always has been and it always will be.

Because as a coach we are often required to wear many hats –  Teacher, Motivator, Role Model, Counselor, Coach, and even Parent for the kids that don’t get enough support from home.

That is NOT easy and takes A LOT of effort.

It takes showing up and being present…which is painfully tough for the 99% of youth coaches that have regular jobs.  It takes dealing with unruly parents.  It takes extra attention to kids that need it.  And it takes hours away from our family.

But here’s a second newsflash:

BEING A “KID TODAY” IS HARD as well.

Kids are more and more coming from split families.  They have to navigate the anxiety-generating landscape of social media.  They have to cope with the pressures of youth sports being professionalized at a younger and younger age.

And they have to put up with the whiny coaches who think their generation is a lost cause and treat them as such.

Most kids I have worked with are much more resilient and driven than they are given credit for.  They manage a lot of obstacles outside their control (see above)…yet they show up ready to work and get better…

If we want to develop better hockey players, it’s time to stop pointing the finger at the kids and take responsibility as adults for showing them the way.  WE are the ones that need to be better.

So with that, here are 5 keys that we all should consider while coaching our “Kids Today”:

“You can’t be hard on kids today”.

OMG…I’ve heard this a million times.  From professional coaches down to mite coaches.  It’s exhausting.

As coaches, being hard on kids is one of the most important things we need to be.  Contrary to many people’s beliefs…kids actually crave DISCIPLINE, ACCOUNTABILITY, and STRUCTURE…because guess what?

Many of them are not getting it from home.

So they don’t understand what it means to have it.  They’ve never been taught.  But when they are, it can be a powerful thing.

But with that we need to be sure of a crucial detail:

We are hard on kids for the RIGHT things.

Don’t be hard on them for making mistakes, being creative, or trying new things and failing.

These are things we should be encouraging.  Rather, be hard on them for the developmental basics IN THEIR CONTROL.

Be hard on them about their attitude and effort, their body language, and their enthusiasm for being a good teammate.

Be hard on them for hockey things like taking short shifts, backchecking, and winning their 1-on-1 battles.

If they don’t bring these particulars to the team, make sure you let them know.  And if it continues, sit them on the bench.  John Wooden was famous for saying that the only thing he could control as a coach was playing time…and when necessary his best friend was often the bench.

Being hard on kids is not screaming, yelling, and degrading.  It’s holding them accountable for the standards you set, and having clear consequences (like the bench) when they don’t meet that standard.

It’s making sure you are not accepting anything less than their best effort and demanding they learn the importance of being a part of a team.

Be hard on them.  But also…

2. BE UPFRONT ON WHY

After a long day of scouting a few years ago, I had a long conversation with Kris Mayotte (Asst. Coach at Providence) …one of my good buddies and one of the best recruiters in the game.  We spoke at length about the importance of kids learning how to lose…learning how to fail…and learning how to take constructive criticism.

Because kids are going to lose, fail, and take a lot of criticism with their future in hockey…and in life.

In sports…they will get benched, injured, or cut from a roster. In life…they’ll get a bad grade on a test, get rejected from a college, or experience heartbreak from a serious relationship.

Our job as coaches is to explain why their attitude and reaction to these experiences are way more important than the experiences themselves.

By holding them accountable and not accepting anything less than their best effort on the things they can control…we are pushing kids outside their comfort zone.  That certainly isn’t easy for them, but it helps them build a vital character attribute: RESILIENCY.

And EVERY DAY at the rink offers us an opportunity to teach resiliency.

Losing games, lack of effort, showing up late: OPPORTUNITY.  Creating competition in practice where a team or player loses: OPPORTUNITY.  Seeing a player treat a teammate with disrespect: OPPORTUNITY.

When we see our kids struggling or misbehaving, we have a choice.  We can choose to do nothing and allow them to think “Poor Me” and “The World is Out to Get Me” (which many of them certainly will)…or we can choose to show them how their setbacks are really just opportunities for growth in disguise.

We can use examples like Sidney Crosby (concussions), Steph Curry (not recruited out of high school), or Tom Brady (you know his story).  These superstars experienced setbacks like the rest of us, but all of them had people helping them push forward.

We can use personal examples of times we persevered or wish that we had.  We can explain how there were people in our lives that held us accountable for our actions and how it helped us grow.

The kids will play for you.  They will want to learn from you.  And they will be better players and people because of you.

This honestly may be the hardest part of coaching.  Especially as a youth coach when we are often arriving at the rink exhausted after a long day of work.

It is IMPERATIVE that we are consistent with our feedback.  If I’ve learned one thing in youth hockey, it’s that if you give a kid an inch…he or she will try and take a mile.  They seem to always test the limits we provide.

And please, be consistent with EVERYONE.

Yes, different kids learn in different ways…but your expectation for every kid’s controllables like attitude and effort should be the same.  Do NOT let your top players slide.  In the end, you are not doing your team or that player any good.

In order to be consistent, we NEED TO HAVE A PLAN and a focus each time we arrive at the rink.  We need to be engaged and aware of body language, effort, attitude, and attention on the ice.  We need to be watching the players as they do their reps…scanning deliberately to see if there’s a chance for a teachable moment.

We tell our players to be ready to go…we must demand the same from ourselves.  Without this daily preparation, it is impossible to be consistent as a coach.

And that is what good coaching is all about.

Nothing goes further with kids than when we hold ourselves to the same standard that we demand from them.  When we share responsibility for the tough times, it shows that we are all in it…together.

And as we can all reflect, there will be days when we just don’t have it as coaches.

Our practice plan doesn’t work.  We stress out when players aren’t doing what we’re asking of them.  We may even lose our cool on a kid that doesn’t deserve it.

These are not the times for finger-pointing…which many of us are conditioned to do.  We too often cast the negativity and blame on them. And are there times where they deserve it?

But what we should be doing is looking in the mirror and asking “Why?” We should be finding a better way to communicate what we want them to do.

Take some responsibility and admit your mistakes to the team.  Taking your share of ownership will allow your players to grasp ownership of their mistakes as well.

Walking through rinks, I see so many coaches roll their eyes, sigh, or throw their hands up and yell when their message isn’t getting across.  I’m sure you’ve seen it.

One of the biggest mistakes I ever made as a young coach was trying to be somebody that I’m not.  Let me explain:

Many of my best coaches growing up were strict disciplinarians.  They yelled, they were tough to play for at times, but they got the best out of me.  So naturally when I started coaching, that is who I thought I needed to be.

It didn’t work because that’s not who I am.  I have always prided myself on having a positive attitude and being upbeat with energy.  So when I tried to intimidate and be extra hard on my players, I got tuned out.

I didn’t enjoy being that character either.  But I played the role because that’s what I thought I needed to be to bring the best out of them.

Boy, was I wrong.

When I spoke to the players and got some feedback, I figured out quickly I was in the wrong.

So I looked in the mirror…and changed.

I started bringing guys aside for one-on-one conversations.  I started talking with them about more than just hockey.  I tried to catch them doing something right on the ice, instead of always looking for mistakes.

I brought my authentic strengths to the team.  I became a better coach.  I got more out of my players.  And I enjoyed coming to the rink and embracing them a heck of a lot more.

Coaches…figure out your authentic strengths and bring them to your team.  You will help your players to be the best versions of themselves only if you are bringing the best version of yourself.

Coaches come in all shapes and sizes, just like players do.  Be the best YOU that you can be.

So the next time you hear an old-timer complain about the youth of today…do me a favor and tell them to beat it. Kids learn and behave the way they do because of us. If they want their kids to be better…they need to be better themselves!

It has been a while since I’ve written one of these, thanks for reading! If you have any questions or comments please add them below or shoot me an email at [email protected].