Home
You are here: Home / Coaches Corner / Everybody Eats Ramen

I recently got hooked on a podcast called ‘How I Built This’ by NPR.  It’s an interview show where influential business leaders tell the story of how they built their successful companies.

The candid interviews with industry leaders like Mark Cuban and Richard Branson allow us to see a much different side to these media personalities.  And through their conversations, you realize these uber-successful men and women are a lot like you and me.  But there’s one thing that sets them apart from 99.9% of the rest of the world:

The value they see in eating Ramen Noodles.

In one of the episodes, a CEO was speaking openly about his failures in the beginning stages of developing his company.  He confessed to being dead-broke and living off a steady diet of Ramen Noodles…which was all he could afford to eat at the time.

The interviewer laughed and interrupted him right there.

And he went on to tell the entrepreneur that he was one of many business leaders…running multi-billion-dollar companies…that sat in his studio and confessed to eating the cheap, noodle dinner at some point during their business journey.

And the crazy thing?

In listening to this podcast, you hear stories of successful moguls failing multiple times during their business-building adventures.  You hear several references to eating Ramen Noodles (not just figuratively – literally) and being on the brink of losing everything.

But however bad it got, the leaders believed their failures became driving forces in their eventual success.  Their disappointments became valuable learning experiences and fuel for their drive to improve.  They went ALL IN and worked (and worked…and worked) until their fortunes turned around.

And they ended up with a FORTUNE because of it. 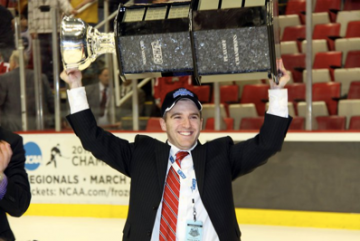 Recently, this podcast got me thinking about a connection between business and sports…and specifically to a thesis presentation I did to attain my Master’s degree from Miami (OH). The presentation uncovered the common traits of Championship College and Professional Coaches. (Going to school for sports was pretty awesome)  #sportsnerd

The project started before I even went back to school, while playing pro hockey and trying to find a way to occupy my downtime.  I knew that I wanted to coach when I was done playing, so I figured I’d start my coaching education by wrapping myself in the words of some of the best coaches on the planet.

In soaking in their wisdom, I began to notice some similarities between the coaches I was reading about.  And the most striking similarity between some of the best coaches in history:

They “ate Ramen Noodles” as well.

Here is the list of coach’s books that I read…along with where they got their coaching starts:

We never think of Bill Belichick as an Assistant Special Teams coach. Or Vince Lombardi and John Wooden as High School coaches. Or Mike Babcock starting his coaching career at a Canadian University.

These guys are legends!

They became legends because they understood the value in Eating Ramen Noodles.

They paid their dues.  They EARNED each job and promotion through their work ethic and tenacity to be the best.

Nothing was given to them on a silver platter.  Nothing was bestowed upon them because of unnaturally gifted abilities.  They’d even tell you that when they started coaching, they weren’t very good.

But they listened, learned, and worked their tails off to improve.  And ended up finding their way to the top of the mountain because of it.

What a great dose of reality for any young coach out there with a passion for the game. Legendary coaches, of all different sports and backgrounds, started at the bottom of the ladder and made it to the top.

If you are willing…there’s a path to where you want to go.  But it involves a whole lot of sacrifice, long hours, and a better-than-average chance of surviving eating Ramen Noodles… ____________

Now, I could end things right there.

This piece has been geared towards coaches, but I want to throw something in for players reading this as well.

Why are these so astonishing?

For every high profile player, there were eight or nine other guys that rode a bus, got sent down, and “ate Ramen Noodles.”

They persevered.  They took the long way, just like 99.9% of every player reading this right now will have to do.  But they got there.  And so can you.

I recently started doing some work with Chris and Greg Collins who do an awesome job developing hockey players in Rochester, NY.  They do it with a motto that I love…one that Chris got from Greg Brown, his Assistant Coach at Boston College the year he was runner up for the Hobey Baker Award:

I look at the successful entrepreneurs from my podcast.  I look at the legendary coaches in the sports world.  They didn’t have a magic plan.  There were no bells and whistles or fancy training.

They “Just Got Good” by working long hours into the night, persevering through failures and outlasting their competition through tenacity, sweat, and an overwhelming passion for what they loved to do.

We live in a media landscape that too often portrays the end and not the journey.  We are shown the victories without the exposure to the losses, late nights, and struggles that all successful people endure.  We need to start celebrating the journeys filled with peaks and valleys and teaching kids that bumps in the road are all part of earning the success they get.

The greatest accomplishments in life are EARNED, not given.  These successful business leaders and coaches worked their way from the bottom up and made their own destiny.

And they did it by recognizing the value of eating Ramen Noodles.